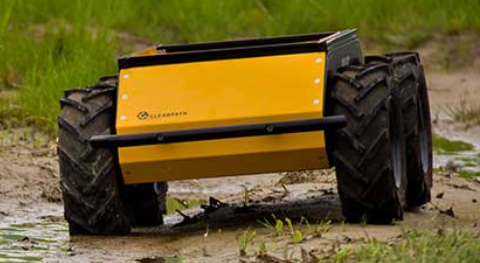 Husky is a rugged and easy-to-use unmanned ground robot for rapid prototyping and research applications.

Mobile robots are inherently hazardous. It is the responsibility of the deployer to ensure that all personnel that may come into contact with the system are trained properly. It is also the responsibility of the deployer to understand the hazards presented and to ensure sufficient safeguards or other mitigations are in place. Refer to the Safety section of this manual for further details.

Your Husky shipment contains the following:

If you purchased standard payload modules or custom integration services with Husky, then additional equipment will be included per your specific configuration, plus further documentation as required.

Husky is built around a computer running Ubuntu (Intel-based computer or Jetson developer kit), paired with a 32-bit microcontroller MCU. The MCU handles power supply monitoring and motor control. The communication channel between the MCU and computer is a serial connection.

The Husky exterior is shown below and includes:

The status panel is a display of LED indicators located on the rear of the chassis which provide information about the current status of Husky. The indicators are described in the table below.

Additional payloads such IMUs, lidars, cameras, GPS, manipulators and many more can be integrated with Husky, either as part of your Husky purchase or installed after receiving your Husky. You can find a list of supported packages and related documentation for payloads in this documention portal, under the Computers, Sensors, Manipulators, and Accessories sections. In addition, refer to Husky Integration for details on how to integrate your own payload or how to integrate a payload kit from Clearpath Robotics. Each payload kit that ships from Clearpath Robotics comes with a custom mounting bracket and cabling for easy attachment to Husky.

The reference frame used by all Clearpath Robotics ground robots is based on ISO 8855, and is shown in the figure below. Husky's front is shown. When commanded with a positive translational velocity (forward), wheels travel in the positive X-direction. The direction of the axes differs from those used for roll, pitch, and yaw in aircraft, and care should be taken to ensure that data is interpreted correctly. 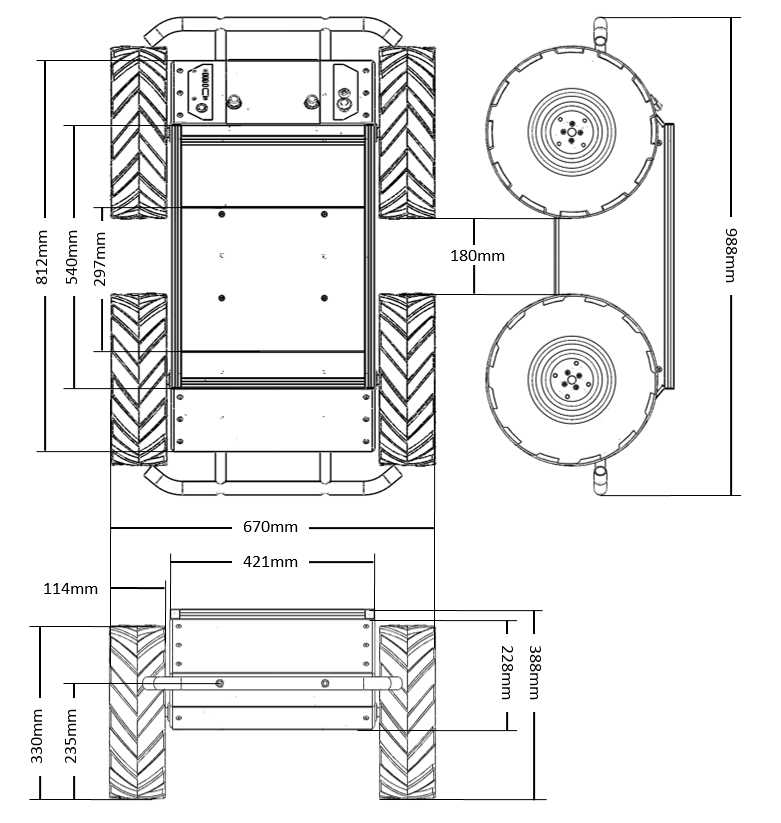 You are ready to go! This section details how to get Husky into action. To begin, place Husky "up on blocks" as described in the Safety section, making sure that the wheels are clear of the ground.

If you purchased an Onboard Computer from Clearpath Robotics with Husky, it is already installed, connected, and powered. If not, or to set up your own Onboard Computer, see the Husky Tutorials.

Note that the Onboard Computer must be connected to Husky's serial port, which is located in the user power panel accessible from the User Bay.

Husky comes with the battery fully charged and installed, but disconnected for safety during shipping. To reconnect the battery: 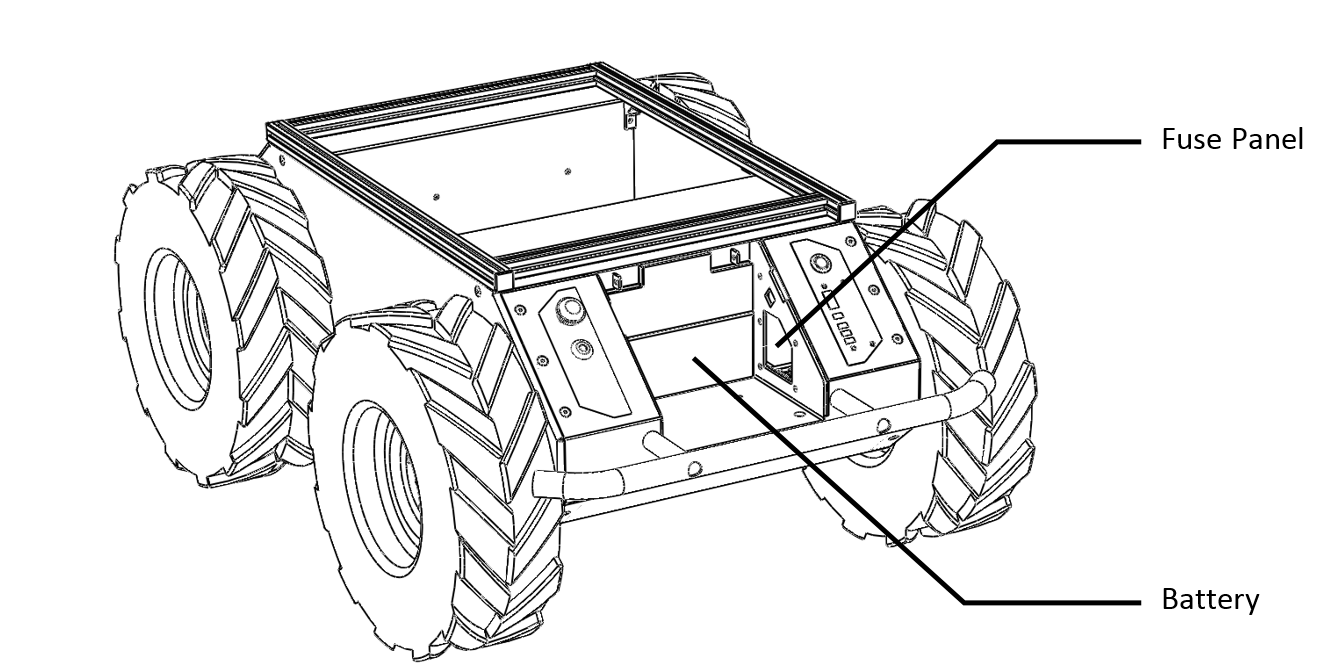 To power on Husky, firmly press the power button located above the status panel. It will illuminate blue, and the status panel lights will show a brief test pattern. The COMM status light will turn red, as the PC is not yet communicating with Husky.

The STOP status light will be red if the Stop button is pressed. If the Stop button is not pressed, press it and verify that the STOP light illuminates. Leave the platform in stop mode until it is successfully receiving commands, indicated by the COMM status light turning green or yellow. If a computer was purchased with Husky, it will be setup to interface automatically upon startup; 60-90 seconds after booting up, COMM status light will change from red to green (or yellow, depending on the stop mode status). This indicates that ROS is up on the computer and has established communications with the Husky base.

To get Husky connected to your local Wi-Fi network, you must first access the Onboard Computer using a wired connection to the robot. See the Husky Tutorials for details.

Connecting and Using the Controller​

To teleoperate Husky, first release the motion stop. Then, referring to the following images, press the enable button (either slow or fast mode) and use the left thumbstick to drive Husky.

Robot Operating System (ROS) is an extensible framework for controlling and working with robotic systems. Clearpath Robotics recommends using ROS with your robot. If this is your first time using ROS, it is strongly recommended to run through our series of ROS 101 tutorials to learn the basics of ROS.

The battery shipped with Husky A200 may be charged outside the robot or while still inside of Husky. If charging while installed, you will need to open the access door to the battery area, and disconnect the battery from the MCU board. From there:

Some older Husky chargers use a three-state charge cycle. For those older chargers, the LED light turns off (rather than green) when charging is complete.

Clearpath Robotics is committed to high standards of safety. Husky contains several features to protect the safety of users and the integrity of the robot.

Husky is a rugged and high-performance robot. For the safety of yourself and others, always conduct initial experiments and software development with the robot raised off the ground. Place a wooden crate, a set of sawhorses, a sturdy storage tub, or any other solid flat structure having a height greater than 150 mm under Husky to keep the wheels clear of the ground ("up on blocks").

When starting out, favour slower wheel speeds. Husky's control loops can accurately maintain velocities as low as 0.1 m/s. Operating at such speeds will give you more time to react if things don't go quite as you expect.

When Husky is operating, keep clear of the wheels, paying particular attention to the pinch hazard which exists between each wheel and the end of the corresponding bumper bar.

The motion-stop function allows a person in the physical vicinity of the robot to halt its motion and prevent re-initiation of motion. Power supply to Husky's motor drivers is enabled by a normally-open relay, which is closed in series with the stop switch. This motion-stop system is intended for use in emergency situations. The motion stop system should not be used as the means of controlling robot motion during regular operation.

This "Stop" function can be asserted by pressing the red stop actuator present at the rear of the Husky, opposite the status panel, as shown in the following figure. The motion-stop function can be reset by twisting the depressed actuator until it returns to an extended position. There is no second "start" action required to reset the stop function. The robot may begin moving again immediately after the stop actuator has returned to its extended position.

The lockout provides a way to secure Husky from performing any type of motion. When in lockout mode, the robot will still power on, but the motors will not drive.

Husky is powered by a single 24 V sealed lead-acid battery, similar to the type found in electric wheelchairs, golf carts, and other devices. Husky's battery is capable of delivering 1800 W, similar to wall mains. This gives Husky's motors their great performance, however, it is also enough power to cause severe bodily harm. Please observe the following precautions:

For the safety of users and to maximize the lifetime of Husky, please observe the following when manually transporting the robot:

Included in Husky are native software checks and limits to protect the robot. However, it is recommended to monitor the system's status during usage with the /status and /diagnostics topics. These topics provide useful information regarding voltages, currents, temperatures and general health of the system.

The total current draw does not include the motors drivers; it is the current consumed by the MCU and user power ports. Husky's motors are rated to draw 10.7 A continuous, but they will spike to several times higher than this, particularly when traversing rough terrain and when turning on the spot. To reduce current draw, consider commanding wider-radius turns from your control software.

Clearpath Robotics recommends the following procedures be followed to reduce the likelihood of harm.

Clearpath is committed to your success. Please get in touch with us and we will do our best to get you rolling again quickly: support@clearpathrobotics.com.

To get in touch with a salesperson regarding Clearpath Robotics products, please email sales@clearpathrobotics.com.

If you have an issue that is specifically about ROS and is something which may be of interest to the broader community, consider asking it on https://answers.ros.org. If you do not get a satisfactory response, please ping us and include a link to your question as posted there. If appropriate, we will answer in the ROS Answers context for the benefit of the community.